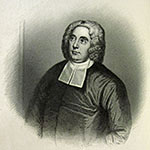 Arthur Aston Luce (1882-1977) was the biographer and editor of the Irish philosopher, George Berkeley (1685-1753). Through his writings such as New Theory of Vision and Principles of Human Knowledge, Berkeley became known for his theory that material objects exist only as they are perceived by the human mind.

This collection of over 290 volumes includes Luce's personal library of early editions of Berkeley's works (see library catalog records) and of other writers such as Bacon, Descartes, King, Locke, and Smith. Many of them contain Luce's penciled notes.

The collection was acquired by purchase in 1993.

Early Editions of the Works of George Berkeley