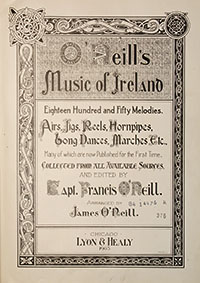 In 1931 Captain Francis O'Neill, one of the great collectors of Irish music, gave his library to the University of Notre Dame. O'Neill's library of Irish history or ‘Hiberniana' as he called it, was known to scholars of Irish music and history and includes all the important books on Irish music of the eighteenth and nineteenth centuries.

Francis O'Neill (1848-1936) was born in Tralibane, County Cork and left Ireland in his teens, having been a school monitor from the age of fourteen. He spent some time at sea, a short time working as a shepherd in the Sierra Nevada foothills, qualified as a teacher in Missouri and eventually married Anna Rogers and settled in Chicago. He was a police officer in Chicago from 1873 to 1905, becoming Chief of Police in 1901. His career in the police force is described in Chief O'Neill's Sketchy Recollections of an Eventful Life in Chicago (2008), a memoir by O'Neill edited by Ellen Skerrett and Mary Lesch (F 548.9 .I6 O54 — Special Collections Reference and Hesburgh Library, General Collection). This book includes a copy of the inventory of O'Neill's library and so is a useful aid to consulting the collection.

O'Neill's published music collections had an enormous influence on Irish music of the twentieth century. O'Neill lightly annotated the books in his library, usually with notes on variant names of tunes or on the source of a tune. He also had many of his books cloth-bound, occasionally including extra pages such as in An Gaodhal which includes a hand-written index at the end of some volumes.

In addition to the published books there are two bound manuscript and a small file of correspondence. The manuscripts are by Henry Hudson, a collector of traditional music, and Patrick Reidy, a dancing master.

The O'Neill Collection may be found through a catalog search, but a classified bibliography is also available.

The O'Neill Collection is complemented by the Hesburgh Library collections on Irish Music and also by the Larry Lynch Collection. Additionally, a set of Uilleann pipes belonging to O'Neill's friend Michael Dunn was given to the Library at the bequest of Mary Elizabeth Dunn in memory of the fellowship of Irish pipers in Chicago.

Finding Aids to the O'Neill Collection