"Imagination is The Thing, I should say. It's far more important than physical courage. To write you need imagination and emotion, feeling. ...

Arguably Argentina's most important author of the 20th century, Jorge Luis Borges undertook numerous literary endeavors throughout his life, emerging as a premier poet, short story writer and essayist on both the Latin American and global literary fronts. A fine example of the wide variety of materials written by and about the Argentine author, the Jorge Luis Borges Collection is one of the country's most distinguished borgesian collections. 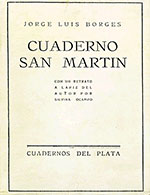 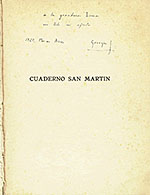 Borges first published as a poet and essayist. The collection holds his first three books of poetry: Fervor de Buenos Aires (1923); Luna de enfrente (1925); and Cuaderno San Martín (1929; cover and title page shown at right). All are extremely rare. In fact, there are only eight or nine copies of Luna de Enfrente of the original 300 copies printed in 1925 on the market today. These works celebrate a Buenos Aires of the past and have a patriotic spirit that Borges would later dismiss.

Inscription from the title page of the 1952 edition of Otras inquisiciones.

Borges' works of essays include Inquisiciones (1925) and El tamaño de mi esperanza (1926) neither of which he ever allowed to be republished, and Otras inquisiciones (1952; cover shown at right), possibly his most significant work of essays. 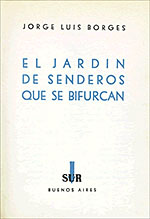 While Borges was considered one of Argentina's best writers by the end of the 1920's, he would not gain international stature until his short stories were translated in the 1950s and 1960s. These short stories were collected and first published as Historia universal de la infamia (1935). The second collection, El jardín de senderos que se bifurcan (1942; cover shown at right), includes "Pierre Menard, autor del Quijote" and "La biblioteca de Babel," a tale of a librarian in an infinite library. His third great collection was El Aleph (1949). He published few other works of fiction as the onset of blindness made it very difficult for him to write short fiction. 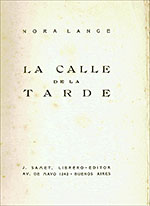 The title page from the 1925 edition of La Calle de la Tarde, written by Nora Lange and with a prologue by Borges.

Prologues gave Borges the opportunity to elaborate on the importance of a particular work. These prologues can be found in a wide range of books by such authors as Nora Lange, Franz Kafka, Adolfo Bioy Casares, Henry James, Ray Bradbury and Jose Hernandez's epic poem El gaucho Martin Fierro, and in nearly complete collections of two series for which Borges wrote prologues: La Biblioteca de babel and Jorge Luis Borges, biblioteca personal.

The collection includes several issues of El Hogar, a household magazine of the day, where Borges had a regular column on books and film. There are a number of individual magazine issues that include articles on Borges. A finding aid with a complete list of magazine issues is also available.

Borges manuscript materials are extremely rare and expensive. There are two manuscripts here in the Borges collection. One consists of a small page titled Coplas containing two handwritten short poems and an illustration of a couple dancing the tango by Borges.

The other is a handwritten script used by Borges at a conference in en el Colegio Libre de Estudios Superiores de Rosario. The central theme of Borges' notes is the detective story genre. 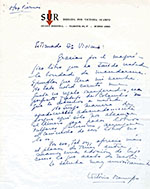 Thank you letter from Victoria Ocampo.

Of interest to the fine print scholar are the Plaquetas, fine print editions of some of Borges' poetry and short stories, published by Juan Osvaldo Viviano as President of the Sociedad de Bibliófilos Argentinos. All pieces are limited editions, printed on different types of fine paper, and many contain proofs inserted with the final copy.

In addition to the works themselves, the collection holds various items relating to the details of the transactions of the publications (including receipts documenting financial and other transactions between Juan Osvaldo Viviano and the well-known printer Francisco Colombo during the publication of El otro), as well as thank-you letters from persons who received a copy (such as the one at right, from Victoria Ocampo).

The O'Gradys purchased four drawings of Borges by the Argentine artist, Elbio Fernández for this collection. The drawings include sketches of Borges' hands, face and a figure drawing, and are on display in the reading room of the Special Collections Department.

A short book titled Las manos de Borges contains photographs of the above drawings accompanied by text (poetry and short essays) written by well-known Argentine writers of the time. The commentaries in this book provide an interesting forum for reflection on Borges' personality as well as his contemporaries' opinions of the writer through the literary description of his hands. 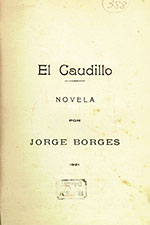 There are a number of items found in the collection that resist categorization. Borges wrote a sympathetic biography of Evaristo Carriego, an Argentine poet whose poems described Buenos Aires street life. Borges' father's one novel, El caudillo (1921; title page at right), can be found here. There is also a rare and unique set of playing sized cards printed with Borges' poems. Borges traveled extensively giving talks and receiving honors later in his life. The work Atlas, signed by both Borges and his second wife, María Kodama, commemorate these travels.

Borges collaborated frequently with other authors on such projects as the detective stories of Don Isidro Parodi that he wrote with Bioy Casares under the pseudonym H. Bustos Domecq. The collection also contains translations by Borges of Virginia Woolf, Andre Gide, and William Faulkner. Finally, the collection includes fifteen books of interviews that Borges gave throughout his life.

The collection also includes two LP recordings of Borges reciting his own works. The first album, Jorge Luis Borges por él mismo sus poemas y su voz, contains some of Borges' most well known poetry from his first publications, Luna de enfrente and Cuaderno San Martín, to his later works, El hacedor and El otro, el mismo. Before some of the poems, Borges briefly talks about the motive or the circumstances which inspired him to write it. These introductions give the listener a sense of what it would be like to sit with Borges among the company of his most intimate friends and listen to the "maestro" recite and comment on his poetry. As José Edmundo Clemente comments on the back of the album jacket,

[trans: "Only the voice has the freshness of the present. I say this because no text will ever be able to recreate the joy of listening to Borges recite his own poetry."]