Oliverio Girondo with his wife, the Argentine author Norah Lange.

Let us cut ourselves loose from logical moorings!

Let us be childish as we are tired of repeating the gestures
of those who have lain below the earth for seventy centuries!

Let us have faith in prayers or in blasphemy,
in the pun of heavenly boredom or in the voluptuousness of damnation!

One of Girondo's critics and personal friend noted that he was "la imagen del poeta que vive exclusivamente para la poesía." Oliverio Girondo lived, breathed and spoke poetry. He was a gregarious and extroverted man, full of a vitality which spilled over into his poetry in the form of humor and linguistic games. The Oliverio Girondo materials in this collection were made possibly through the generosity of Robert (ND '63) and Beverly O'Grady (SMC '63).

Oliverio Girondo's life exemplifies the spirit of the avant-garde during the 1920s. Born into wealth, as a young man Girondo agreed to attend law school in exchange for summer trips to Europe. He used these vacations as an opportunity to befriend the French symbolist poets and meet the Spanish avant-garde, quickly developing a friendship with the ever popular Ramón Gómez de la Serna. Girondo's first book of poetry was even published in France in 1922 and not in his native Argentina. Titled Veinte poemas para ser leídos en el travía, it is often grouped with his Calcomanías, and together they are informally known as his "travel" poetry. The fame earned from these two works encouraged him to continue his intercontinental trips with the purpose of promoting intellectual exchange between the far-flung members of the avant-garde.

To further this effort in his own country, Girondo helped found the literary magazine Martín Fierro. He wrote the publication's manifesto, calling for the practice of cultural cannibalism in order to develop a distinctive, authentic South American voice. The 1932 publication of Espantapájaros, al alcance de todos, only increased his popularity, and soon he began writing a series of politically themed articles for La nación that would later be published as Nuestra actitud ante el desastre. In 1943 Girondo married his longtime friend, the American poet Norah Lange. His last major work of poetry, En la masmédula, was published in 1953. Original editions of his poetry are often illustrated by the author, and reflect his surrealist tendencies. 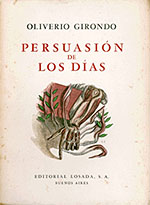 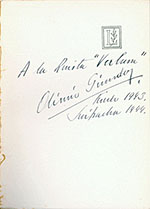 The Oliverio Girondo Collection is a comprehensive collection that traces the literary development of Girondo, containing first editions of all of Girondo's poetic works, the periodical Martín Fierro, manuscript materials and critical works about the poet. Girondo's poetic career is often divided into two periods, the first period includes Veinte poemas para ser leídos en el tranvía (1922), Calcomanias (1925), and Espantapájaros (1932). A collection of surrealist poems, our copy of Veinte poemas contains colored illustrations by the poet. The 1925 pocket edition of Veinte poemas measuring approximately 1/4 of the original 1922 edition is also included in the collection.

Calcomanias, published in Madrid during one of Girondo's many trips abroad, boasts a hand-written inscription and signature of the author. Our edition of Espantapájaros is one of 65 special editions printed privately and signed by Girondo.

A decade after the appearance of Espántapajaros, Girondo published Persuasión de los días (1942; cover and inscription with signature at right) which marked a new stage in his poetic career and is considered his most important book of poetry. Influenced by dadaism and Nietzsche, Girondo's later poetry reflects a new perspective obsessed with annihilation and the conviction that we live in a useless and false world. Campo nuestro followed in 1946 and then En la Masmédula in 1954. Both Persuasión de los días and Campo nuestro are inscribed by Girondo.

As an epilogue to his poetic career, Girondo published the illustrated poem Topatumba in 1958, a limited edition with drawings and the signature of artist Enrique Molina. 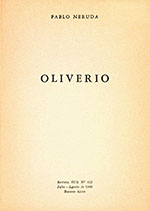 Cover to the tribute poem to Girondo titled "Oliverio", as it first appeared in the July/August 1968 issue of SUR.

While Girondo is most well-known as a poet, he was also instrumental in the production of the literary newspaper "Martín Fierro". We have issues n° 1-45 of El periódico Martín Fierro as well as a memoir, El periódico Martín Fierro 1924-1949, about the newspaper prepared and edited by Girondo, then director of the publication. In 1937 Girondo published the short story Interlunio dedicated to his future wife, Norah Lange, and a political essay in 1940, Nuestra actitud ante el desastre.

In addition to Girondo's own publications, the collection contains several critical works about the life and work of the Argentine poet. Another item of interest is a tribute to Girondo in the form of a poem titled "Oliverio" written by his close friend Pablo Neruda. The collection also includes four books taken from Girondo's personal library which were printed specifically for and inscribed to the writer and his wife, Norah Lange. One of these is A la pintura: cantata de la linea y del color (1945), a colorful work of well-known paintings with accompanying poetic verse complied by Rafael Alberti and Attilio Rossi.

The Oliverio Girondo manuscript materials are among the most interesting collections held by Notre Dame. The first manuscript poem, "Alta noche," can be found in his book, En la masmédula, and is dated December, 1961. The remaining thirteen works are undated and almost all have editorial corrections made by the author, revealing his progress as he works toward a finished product. Most deal with the theme of politics and modernity, and while they appear to be written in verse, they often have the same essay feel of Espantapájaros. In addition, "Diario" (MSH/SCL 5005-11) and "Diálogo sobre el teleficismo" (MSH/SCL 5005-12) are also concerned with these themes, but are clearly personal notes made by the author. These works are not found in this exact form in his Obra completa, however similarities in theme indicate that they may be related to Nuestra actitud ante el desastre.