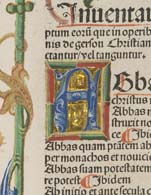 Detail of an initial in the index to Jean Gerson's Opera printed in Strassburg in 1488.

The collection consists largely of philosophical and theological works, primarily patristic and scholastic authors. There are also several illustrated German and Latin bibles, including a leaf of Gutenberg's 1455 bible, the first Latin translation of the Ship of Fools, the first edition of the Nuremberg Chronicle, and the first printed edition of Thomas Aquinas, believed to have been completed by Johann Gutenberg ca. 1460.