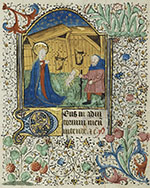 Rare Books and Special Collections houses a variety of Medieval and Renaissance materials. The manuscript collections are comprised of 60 codices and a number of single leaf or extracted fragments spanning the late eleventh to early sixteenth century. A survey of binding fragments in the print collection was recently undertaken, which yielded over 400 additional fragments. The manuscript collections are mainly Latin language material with a few vernacular witnesses in English, French, Italian, and Germanic languages.

Special Collections also holds over 100 incunabula and a modest numismatic collection. Post-1500 imprints are vast in number and broadly collected, with exceptional holdings in Renaissance editions of Dante, Petrarch, and Boccaccio. A diverse collection of deluxe medieval manuscripts facsimiles are also kept in Special Collections.

Our collection includes hundreds of original-format facsimiles of medieval books. These facsimiles are intended to provide access not only to the texts and artwork handed down in medieval manuscripts, but also to aid in the comprehension of each manuscript book or object as an artifact. Not simply providing a modern version of the contents of the medieval work, these facsimiles grant the user access to the construction of each individual work, as well as giving insight into aspects of medieval book production. Due to advances in technology, these facsimiles are accurate renderings of artifacts that are historically important, often famous, and typically priceless.

The collection covers most aspects of written culture in the Middle Ages: bibles and works containing biblical texts for ritual use, such as lectionaries, gospel books, psalters, prayer books, choir books;works related to natural philosophy, like lapidaries, bestiaries, and other scientific treatises; papal, imperial, and epsicopal documents; maps, chronicles, and guides; literature from the classical and medieval period, including works by Virgil, Chaucer, Dante, and Boccaccio, to name a few. Because the collection has a western focus, texts contained in the facsimiles are written primarily in Latin, but we also have facsimiles of books and documents written in Arabic, Syriac, Greek, Slavonic, and Western European vernacular languages. In addition, these facsimiles show the range of formats for communicating textually and visually in the pre-Modern world, including papyrus, scrolls, rolls, charters, and books as we traditionally understand them.