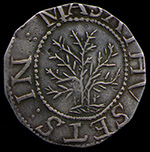 A catalog and historical essay on the coins of colonial and early America from wampum and Massachusetts silver through the provisional half disme of 1792. The catalog contains over 275 coins divided by coin types. Each section contains an introductory essay reflecting recent scholarship followed by full color high-quality jpeg images and descriptions for each coin.

A few highlights of this collection include: a group of Spanish American gold ingots from 1659, a well preserved Noe 1 Oak Tree shilling (at right), a Higley copper, a Continental "dollar", a 1784 imitation British halfpenny and a 1792 half disme. 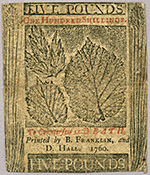 A catalog featuring hundreds of examples of colonial paper currency with supplementary sections on colonial lottery tickets and fiscal documents. Currency examples range from the New York issue of May 31, 1709 to the fractional currency privately emitted in the 1790's during the copper panic. Emissions are listed under the colony of issue followed by Continental Congress issues. There are a number of notes printed by Benjamin Franklin (see example from Pennsylvania at right) and several Massachusetts examples by Paul Revere.

This catalog includes descriptions and images of about one hundred coins, tokens and medals depicting George Washington dating from 1783 to the Inauguration Centennial medals of 1889. The items are organized chronologically and a full site map is available as well as a listing by Baker number.

A few of the highlights in the collection are: an example of the earliest Washington token the 1783 Georgius Triumpho copper, a Born Virginia token, an example of a Washington memorial funeral token created by Jacob Perkins, a Washington Monument token of 1848 (at right) and one of a very few surviving examples of the NO GOOD token.

Most of the items on exhibit were part of an anonymous donation to Notre Dame consisting of 1100 tokens and medals covering the Nineteenth century.

The Numismatic Collections of the Department of Special Collections have their own Web site at: coins.nd.edu. This site currently consists of three sections:

In addition, we are working on our collections of Confederate Currency and our Nineteenth Century American token collection. To view several hundred of our unlinked token images, click on Index of Tokens. To see preliminary scans of some CSA notes, click on CSA Index.