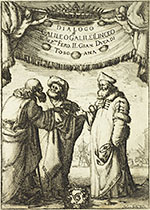 Special Collections holds approximately 4,000 early printed books in the subject areas of natural science, natural history and medicine. These include first editions of several classics of physics and astronomy: Copernicus' De revolutionibus orbium celestium (1543), Galileo's Dialogo sopra I due massimi sistemi del mundo (1632), and Isaac Newton's Philosophiae naturalis principia mathematica (1687). The Descartes collection, which was donated by Father Elias Denissoff in 1966 but has been supplemented in subsequent years, includes many seventeenth-century editions of L'homme, the first anatomical treatise to support Harvey's theory of the circulation of the blood, several seventeenth-century editions of Le Monde as well as the first edition of Discours de la methode (1637). Christopher Clavius' exposition of Sacro Bosco (1581 and 1610) as well as his discussion of the Gregorian calendar (1603) are also found in Special Collections.

The largest collection of early natural scientific books is from a donation by Edward Lee Greene (1843-1915), an early botanist who described more than 4,000 species of western American flora for the first time and who published along with many articles an important two-volume history of botany, Landmarks of Botanical History (v.1 1909, v. 2 1936). Greene collected an extensive library of more than 3000 books, including many early works, especially herbals from the sixteenth century, e.g., Otto Brunfels' Herbarum uiuæ eicones ad naturæ imitationem (1532) as well as many important nineteenth-century contributions to botany. His library as well as an extensive herbarium which includes types of the many species that he described (now in the Greene-Nieuwland Herbarium) was given to the University of Notre Dame in February 1915. Greene's collection is complemented by the library of Fr. Julius Nieuwland, who was a student of Greene's and taught botany and chemistry at the University of Notre Dame, Fr. Nieuwland's library was donated to the university in 1936.