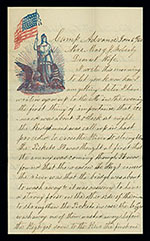 Special Collections’ North American manuscript holdings are arranged into the five chronological or topical classifications listed below. The Web pages dedicated to each classification contain collection-level descriptions of the department’s processed holdings in that area, which may link to finding aids, transcriptions, images, or other descriptive matter. Individual collections are typically distinguished by unity of provenance; consequently, the collections described on this site vary greatly in size, from a single manuscript to many thousands.

Questions and comments regarding the collections on these pages should be directed to the American History Librarian, Rachel Bohlmann.

Researchers seeking material relevant to the history of the University of Notre Dame should contact University Archives.

Manuscripts of Colonial and Revolutionary America

The Colonial/Revolutionary manuscript classification (MSN/COL) includes most manuscript groups originating, wholly or primarily, in North America before the year 1788. Materials originating in the Spanish colonies in North America are excluded; these may be found among the Latin American and Iberian Studies collections. The great majority of the items in the Colonial/Revolutionary classification originated in the British colonies on the Atlantic seaboard of what is now the United States, or are American manuscripts of the Revolutionary and Confederation eras.

Special Collections' Early National and Antebellum manuscript classification (MSN/EA) includes all manuscript groups originating, wholly or primarily, in North America in the years 1788 to 1860. The great majority of these items originated in the United States.

Special Collections' Modern American manuscript classification (MSN/MN) includes all manuscript groups originating, wholly or primarily, in North America since the end of the Civil War. The great majority of these items originated in the United States.

The Sports Manuscripts classification (MSSP) includes manuscript material of all periods relating to athletic sports, physical culture, health and exercise, and outdoor leisure and recreation. Besides handwritten and typewritten texts, listings include other non-published formats with some claim to uniqueness, most notably scrapbooks and photographs. Collections are primarily, though not exclusively, of North American origin.

Each section of the Manuscripts of North America held by Special Collections has its own Web site: