Detail of a linen fragment (ca. 300 BCE) from the Egyptian Book of the Dead showing the jackal-headed Anubis holding an ankh and scepter.

Special Collections possesses a few examples of ancient and early writing which may be classified as follows:

In 1913, a collection of one hundred cuneiform tablets were purchased from Edgar J. Banks, an Assyriologist and dealer of antiquities associated at one time with the University of Chicago Oriental Exploration Fund, Babylonian Section (1903-1905), a forerunner of the Oriental Institute established in 1919 at the University of Chicago. Banks lectured annually on his archaeological travels at Notre Dame from 1907-1919 and also sold the University a Marad cylinder inscription.

In a letter dated 6 April 1913 to then University President John Cavanuagh, Banks claims that "the tablets are in every way the equal of those in the British Museum, and with the exception of those from Sin-ga-shid, none of them have ever been published, and many of them have never been seen by any other European." The texts remain unpublished, and hence their true value to the field of Assyriology undetermined. Nevertheless, a preliminary attempt was made in 1969 to create a catalog of the collection based on Banks' descriptions and transcriptions (see W. John Shrader, "A Review of the Notre Dame Collection of Cuneiform Tables from Sumer and Babylon, 2300-500 B.C." in the departmental files). By that time, unfortunately, some twenty of the original tablets had been lost.

The remaining eighty tablets originate from the following four Sumerian cities: Warka (biblical Erech; cf. Gen. 10:10), Drehem, Senkereh (biblical Elassar; cf. Gen. 14:1) and the ruins at Jokha (Umma), and may be classified into the following types: votive cones, temple records, sealed tablets, messenger tablets, envelope tablets and merchandise tags. Most have been dated to the Akkadian Empire of Sargon I (ca. 2340-2125 BCE), but a few to the Neo-Babylonian Empire (612-539 BCE). Apart from the early envelope tablets, probably the most valuable tablets in the collection are from this later time, being letters dating from the reign of Nebuchadnezzar II. 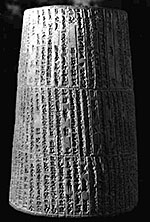 Special Collections possesses a royal building inscription cylinder of Nebuchadnezzar II (605-565 BCE) relating to the Lugal-Marada temple in the ancient city of Marad, near the modern-day Iraqi city of Wannet es-Sa'adun. The text has been identified as Langdon Nebuchadnezzar No. 2 in Stephen Langdon, Building inscriptions of the Neo-Babylonian empire part 1, Nabopolassar and Nebuchadnezzar (Paris, E. Leroux: 1905).

The Notre Dame exemplar is one of about thirty such cylinders known to have survived and has been described, together with a transliteration and translation, in Anton C. Masin, "An Unrecorded Exemplar of a Marad Royal Building Inscription Cylinder of Nebuchadnezzar II at the University of Notre Dame" Bulletin of the Canadian Society for Mesopotamian Studies 24 (1992): 1-9. For a listing of other exemplars see P. R. Berger, Die Neubabylonischen Königsinschriften (Kevelaer, Butzon & Bercker, 1973) as well as Masin, who reports several not recorded by Berger. Another published transcription which is close to the Notre Dame cylinder appears in Thorkild Jacobsen, Cuneiform Texts in the National Museum, Copenhagen (Copenhagen, C. T. Thomsens bogtrykkeri, 1939), 62-67.

Marad cylinders were written as building inscriptions or deposits to be buried in the walls or foundations of the Lugal-Marada temple. The inscription explains that while Nebuchadnezzar was restoring the temple at Marada he found the inscription of one of his ancient predecessors, Naram-Sin, in the temple foundation, and so decided to place his own inscription beside it. The Notre Dame exemplar is a hollow truncated sun-baked clay cone measuring 216mm high with a base diameter of 140mm and an apex diameter of 108mm. It contains a total of 145 lines in three columns, all legible except for a small portion at the end of the first two columns, but comparison with other exemplars has made it possible to decipher them.

The Notre Dame cylinder was purchased in 1916 from Edgar Banks, who had acquired it from local Arabs who had unearthered it in the early 1900s when digging in ruins along the Euphrates River for an irrigation project.

Egyptian Hieractic Script, fragments from the Book of the Dead

Two fragments of hieractic script in black ink on linen dating from the early Ptolemaic period (ca. 300 BCE) were purchased in March 1997. Both were formerly among the collection of oriental manuscripts assembled by Sir Thomas Phillipps (1792-1872). The first fragment was purchased by Phillipps from Charles Augusts Murray, British Consul General in Egypt (1846-1863).

The text with the vignette was written for a man named Petosiris, whose mother was named Tetosiris. The text consists of the end portion of spell 147 from the Book of the Dead, which is an interesting spell entitled "Spell for knowing the gates of the house of Osiris in the West and the gods who are in their caverns while offerings are made to them on earth." Most of the spell consists of the names of the various gods associated with the netherworld gates and what the deceased should say to them in order to pass through. However, the Hesburgh fragment only contains the end section of the spell associated with the 7th gate. It is possible that there was more text to the right of the first column which is now lost.

The other fragment contains three columns each with seven lines. The text consists of spells 7-11 from the Book of the Dead, in that order. The text was written for a man whose name is also Petosiris, but his mother's name is Nanesbastet.

[Descriptions contributed by Foy Scalf, Head of the Research Archives at the Oriental Institute, University of Chicago; she has a forthcoming article on these fragments to appear in the Journal of the American Research Center in Egypt.]