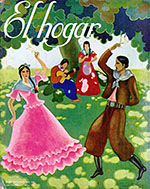 Cover of the 29 October 1937 issue of El Hogar, from the Jorge Luis Borges periodical collection.

Special Collections holds substantial print and manuscript collections for the study of Latin America and the Early Modern Hispanic World. The materials range from rare books printed in the sixteenth and seventeenth centuries, to colonial-era manuscripts, to scarcely-held literary journals, periodicals, and writers' correspondence. Books and manuscript materials related to literary movements of the twentieth-century Southern Cone and Hispanic Caribbean are a particularly deep strength of the department's Latin American holdings. Other strengths include historical materials from colonial and republican Peru as well as the countries of the Southern Cone.

The Hispanic Caribbean literature collections emphasize the work of the Orígenes group and its authors, including José Lezama Lima and Virgilio Píñera. Along with rare early editions, there are substantial holdings of Orígenes group journals. The rare books collection also includes over 200 Ediciones Vigía artist books, handcrafted and published in Matanzas, Cuba, from the mid-1980s to the present.

History of Latin American and the Early Modern Hispanic World

Special Collections has significant print holdings for the early modern Hispanic world. These include over 500 volumes published in the sixteenth century on a variety of subjects ranging from architecture and religion to language and literature and over 600 volumes from the seventeenth through nineteenth centuries. These items reflect the particular interests of scholar and collector José E. Durand, who sought to recreate the library of Peruvian humanist writer El Inca Garcilaso de la Vega.

Special Collections also possesses the library and archive of the Dominican Convent of St. Raymond of Penafort, founded in 1602 in the Diocese of Barcelona. These materials include some 40 works of scholastic theology with imprints ranging from 1514-1707 and nine bound manuscripts containing receipt and expense ledgers, meal and granary records, records of liturgical celebrations, and a census of friars.

Special Collections' strengths in the history of colonial and early republican Peru include holdings of early chronicles, histories, and grammars published in Spain and Peru. These are supplemented by more than 40 literary, historical, financial and ecclesiastical manuscript items, including unique materials such as the only existing copy of a seventeenth-century Peruvian literary work entitled Tragicomedia de la Ystoria de Joseph.

Special Collection's holdings of nineteenth- and early twentieth-century political and cultural serials are particularly strong. The Peruvian materials include runs of some 150 unique periodicals and more than 100 broadsides and circulars. These items address political and military topics such as the wars of independence, the Peru-Bolivian Confederation, and the War of the Pacific and also highlight changing trends in literature, fashion, and entertainment. Rare periodicals from Uruguay and Argentina, including a full run of Contra, created by Raúl González Tuñón, are also a collection strength.

In addition to these primary strengths, Catholiciana is an enduring interest of Rare Books and Special Collections. This includes a growing collection of sermons from colonial and republican Latin America.